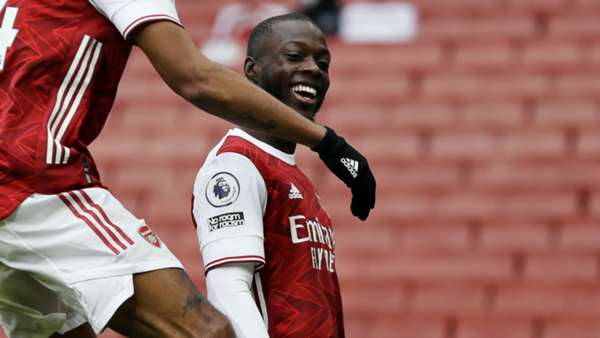 18 months after joining Arsenal, and the record signing still divides opinion in North London…this has to change in the New Year

When Arsenal splurged on Nicolas Pepe in summer 2019, they believed the then-LOSC Lille wide attacker will take them to the next level.

Even though the club’s decision-makers went against the wishes of former boss Unai Emery, who wanted Crystal Palace forward Wilfried Zaha, the majority of supporters were excited about Pepe.

Despite the high fee, his age, quality and end product indicated they hadn’t only made the right decision to opt for the younger Ivory Coast attacker, but also found someone to share the final-third burden with Pierre-Emerick Aubameyang and Alexander Lacazette.

Going into 2021, however, and it’s not amiss to say the big-money acquisition hasn’t delivered on his promise with the talented Bukayo Saka and previously unknown Gabriel Martinelli probably ahead in the pecking order as it stands.

Undoubtedly, the New Year will be of great significance to the 25-year-old, as he strives to win back his place in Mikel Arteta’s side.

After a bright start to the year against Manchester United at the Emirates Stadium, anyone who had intimated the wide forward wouldn’t be in Arteta’s team by the end of the year may have been dismissed.

Pepe not only scored in the impressive win over the Red Devils, he arguably gave his best performance in an Arsenal shirt on that glorious night in North London.

Nevertheless, the high point of the year came in that marvellous FA Cup run that culminated in the Gunners’ 14th title. While Aubameyang got the majority of the adulation, Pepe’s role in the semi-final and decider against Manchester City and Chelsea often falls under the radar.

Unfortunately, he has mostly failed to kick on since that final — although, this can be said for nearly every member of the side, including Auba — with his lowest moment coming at Elland Road where he received a mindless sending off against Leeds United.

While Arteta has had to make do with flashes of brilliance in the Premier League, Pepe’s been on fire on the continent, having a direct hand in six goals (three goals, three assists) in the Europa League. Nobody in the Arsenal side has more.

Now, the hope is to see the Jekyll and Hyde winger carry his form in Europe into the top flight games consistently in 2021.

Has Nicolas Pepe gone from £72 million flop to potential ⁦@Arsenal⁩ Player of the Season? pic.twitter.com/XPc7FAySMK

In truth, it would take a massive climbdown by the club to even consider selling the player in whom they invested a lot approximately 18 months ago.

Allowing any clubs to sniff around means Arsenal have admitted the West African won’t turn into the key player they imagined he’d become at the club.

While no links have so far surfaced, it’ll be quite strange for any side to take the plunge on someone whose stock has fallen significantly in the last year and a bit.

Simple. For Pepe to finally show the sort of form and consistency he displayed in those final 24 months in France, irrespective of the competition for places in Arteta’s forward line.

Arsenal, for their part, do need the ROI as they hope to make a play for the top four in the second half of the season — there’s currently a nine-point deficit but nothing can be ruled out in a crazy season — and look to win the Europa League for the first time.

If he continues to play second fiddle to the club’s young attackers.

Indeed, this wasn’t the scenario Pepe imagined at the start of the season, but Martinelli’s return to fitness and Saka’s continued ascent don’t bode well for the New Year.

Klopp: Liverpool Can’t Force Players To Stay But Why Would Salah Want To Leave?