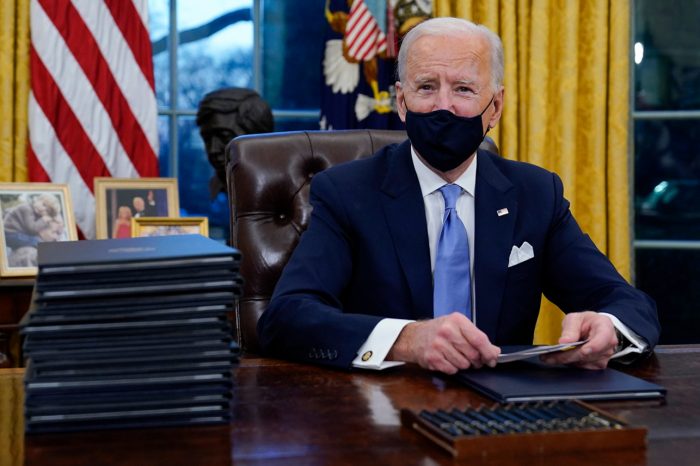 The United States has threatened sanctions against Nigeria. The President of the United States of America, Joe Biden threatened to place financial and visa ban on Nigeria and other countries that have refused to make laws to accommodate Lesbian, Gay, Bisexual, Transgender and Queer and Intersex (LGBTQI) people.

The President issued a presidential memorandum aimed at expanding protection of the rights LGBTQI people worldwide. Sanctions against such nations may include financial punishment. Nigeria is categorized as a homophobic country due to its anti-gay posture which has been increasingly criticised by global rights groups. Recall that despite pressure from former US President, Barrack Obama, ex-President, Goodluck Jonathan signed the Same-Sex-Marriage (Prohibition) Act in January 2014.

The anti-gay laws in Nigeria, a leading ant-LGBTQI country in Africa, prescribes between 10 and 14 years in prison for anyone caught flouting the law either by cohabitation between same-sex sexual partners, public show of same-sex relationship, registration, operation or participation in gay clubs, societies and organisation, amongst others. Whether the present administration in Nigeria will bow to the pressure from the US government and revisit the country’s anti-gay marriage law remains unclear at the moment.

Biden’s memo reads, “When foreign governments move to restrict the rights of LGBTQI+ persons or fail to enforce legal protections in place, thereby contributing to a climate of intolerance, agencies engaged abroad shall consider appropriate responses, including using the full range of diplomatic and assistance tools and, as appropriate, financial sanctions, visa restrictions, and other actions.

“All human beings should be treated with respect and dignity and should be able to live without fear no matter who they are or whom they love.“The United States belongs at the forefront of this struggle – speaking out and standing strong for our most dearly held values.”

The memo directs US agencies working in foreign countries to work harder to combat the criminalisation by foreign governments of LGBTQ status or conduct, and directs the State Department to include anti-LGBTQ violence, discrimination and laws in its annual human rights report.

It calls for increased efforts to ensure that LGBTQ asylum seekers have equal access to protection, expanded training for US federal personnel, and potential increased use of priority referrals to expedite resettlement of vulnerable people.

It also instructs agencies to consider appropriate responses, including the full range of diplomatic tools, and potentially financial sanctions and visa restrictions, when foreign governments restrict the rights of LGBTQ people. Biden announced the push during a forceful speech at the State Department, vowing to rebuild US credibility worldwide.

“To further repair our moral leadership, I’m also issuing a presidential memo to agencies to reinvigorate our leadership on the LGBTQI issues and do it internationally,” he said. Recall that with less than two weeks to the end of his administration, former President, Donald Trump had weakened the protection for LGBT community by rolling back non-discrimination protections for such people seeking the services of health and welfare programs funded by the US Department of Health and Human Services.

Few days after Joe Biden emerged winner of the November 3, 2020 presidential election, Dr. Emeka Nwosu, a former Special Adviser on Media and Public Affairs to ex-Senate President, Evan Enwerem, had told Africans, especially Nigerians that Biden should not be judged by the works of his former boss, Barrack Obama, who sanctioned LGTB rights and promoted Antichrist. Nwosu noted that most people in Africa who were reluctant about Biden’s candidacy was because of issues such as LGBT and antichrist.

He said Nigerians should, however, expect and hope that Biden runs his presidency different from that of Obama even though he was part of the government for eight years. DAILY POST, in a special report had projected that the recent rise in homosexuals in Nigeria may have been influenced by the new democratic government in the United States led by President Joe Biden.